The National Museum of Cinema

Swissssh. Diabolik stepped onto the scene, silent as the swish of his dagger, on a grey autumn day in 1962, November 1st, to be exact.
Next year, the “King of Terror” invented by the Giussani sisters will turn sixty. The Museo Nazionale del Cinema is celebrating in advance, in tandem with the release of the highly anticipated Manetti Bros. film Diabolik starring Luca Marinelli, Miriam Leone, Valerio Mastandrea and Alessandro Roia, produced by Mompracem with Rai Cinema and distributed by 01 Distribution.

The exhibition Diabolik alla Mole, curated by Luca Beatrice, Domenico De Gaetano and Luigi Mascheroni, is on view on the main floor of the Museo Nazionale del Cinema, a brand-new display space that completes the traditional visitor’s path through the museum.

In the iconic promotional image designed for the exhibition by Riccardo Nunziati of the Astorina publishing house, the eyes of the black-clad criminal look out over Turin from the top of the Mole.

At once both an exhibition and an event, Diabolik alla Mole is a visual concept that combines cinema with photos and props from the new film, including the guillotine from the third issue of the comic book, the one that inspired the Manetti Bros. storyline. And also, material on view here for the first time from the version directed by Mario Bava in 1968 and the one begun and never completed in 1965, which was to be directed by Seth Holt and star the French actor Jean Sorel. But there is more. Eva Kant’s keen sense for design, which reflects the modern lifestyle in the early 1960s, and her passion for art (Diabolik stole a painting for her, in demonstration of his love) inspired the exhibition design, which takes visitors on a trip inside the dark underground hideouts of the diabolical couple. Filled with design pieces from the time, here we find Castiglioni’s “Taccia” lamp and the Le Corbusier chaise longue, as well as Pop-inspired works of art that pay homage to the elusive criminal and his accomplice. And then, alongside comic books, plates, original drawings and rare material from the Astorina archive and private collectors, images from Intesa Sanpaolo’s Archivio Publifoto help reconstruct the atmosphere of the criminal underworld in the cities of northern Italy and the gangster activity that linked Turin and Milan during the glossy and “dark” 1960s. Intesa Sanpaolo is the main partner of Diabolik alla Mole.

The Diabolik soundtrack (record label Carosello Records, publisher Edizioni Curci e Creuza) also plays a starring role in the exhibition, with the music by Pivio & Aldo De Scalzi serving as the background for the drawings, plates and props. The materials on display also include the double vinyl soundtrack and the musical scores, testifying to the synergy between the comic book and what it has inspired.

For the exhibition, the film world of Diabolik also joins forces with new media like video mapping and virtual reality. After the stunning video mapping display that sheathed the Mole Antonelliana for three weeks with striking images from the film comes exclusive VR content that allows visitors to fully immerse themselves in the atmosphere of the film, specifically the King of Terror’s mysterious hideout.
Previewed on 16 December on the CineVR of the National Cinema Museum, Diabolik VR Experience is a short film lasting 1’32” and was made by Omar Rashid Gold Productions for Rai Cinema. Filmed in VR360 in Diabolik’s mysterious hideout, it is also available starting 17 December on the Rai Cinema Channel VR app and the Facebook pages of 01 Distribution and of Diabolik - Il film.

The exhibition is accompanied by a catalogue, published by Silvana Editoriale.

In celebration of the exhibition at the Museo Nazionale del Cinema and the release of the film in theatres, Poste Italiane offered a special Diabolik stamp cancellation. On Thursday 16 December, from 11:00 am to 5:00 pm, on the main floor of the Mole Antonelliana, a limited edition folder will be on sale for 15 euros, containing three postcards: two of the original posters for the film, marked with the stamp cancellation, and one with an image from the comic book. The stamp cancellation can also be made on a single postcard of a film still, for 2 euros.

Turin’s homage to Diabolik is rounded out at MAUTO – Museo Nazionale dell’Automobile, Turin with the exhibition Colpo grosso al museo, curated by Giosuè Botto Cohen. Celebrating the sixtieth anniversary of Diabolik’s legendary car, the Jaguar E-Type, the exhibition will be on view until 6 March 2022.

Entry with Museum or Museum + Panoramic Lift ticket. Ticket for Diabolik at the Mole only: €5.00.

For their homage to Diabolik, the Museo Nazionale del Cinema and Mauto are offering a reciprocal discounted entry price: present your ticket from one of the museums at the ticket desk of the other to receive your discount. 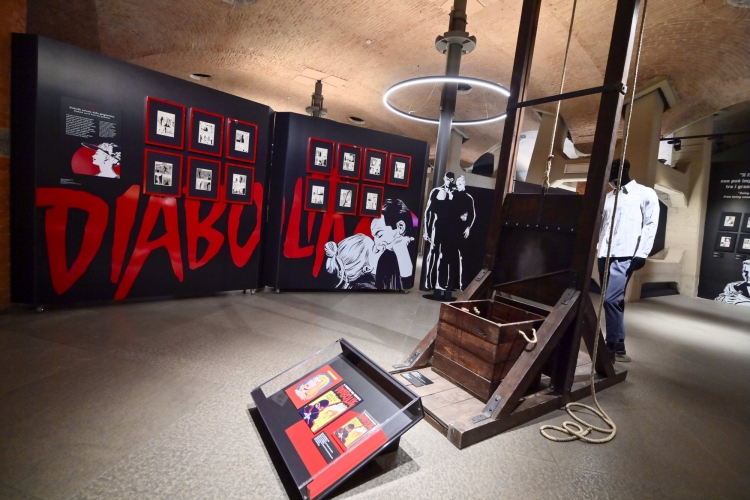 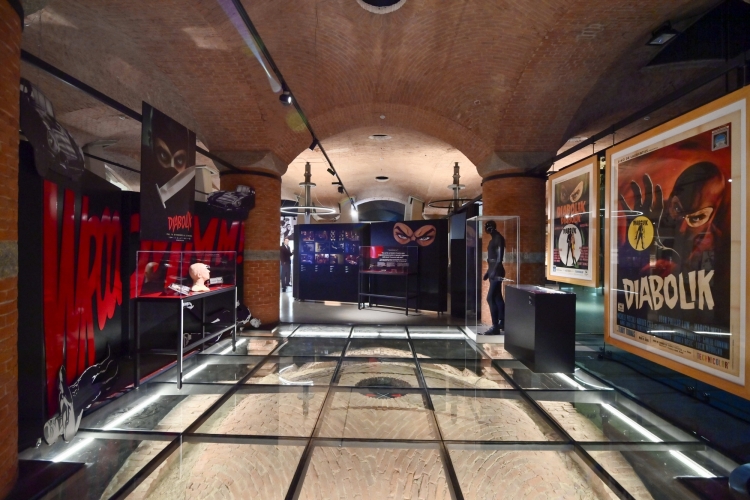 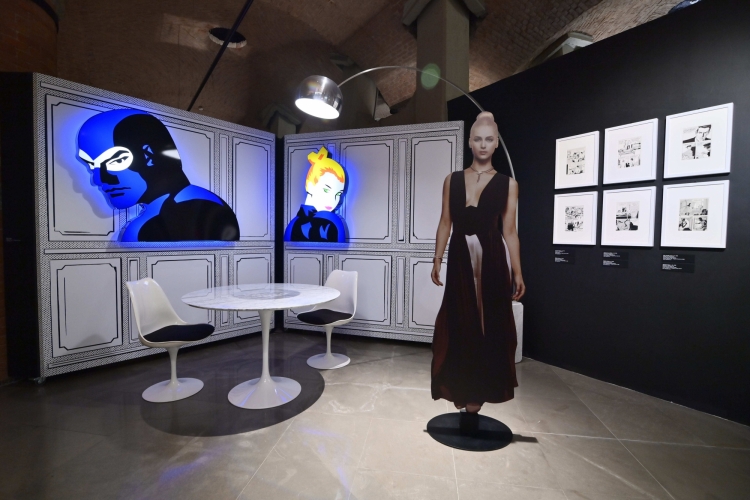 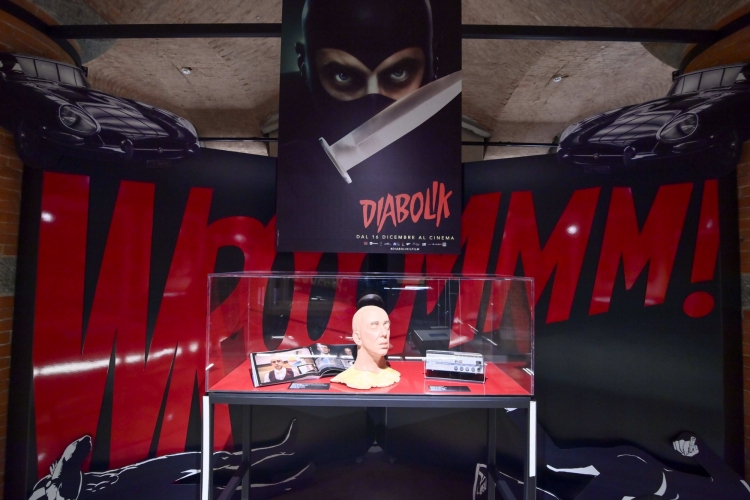 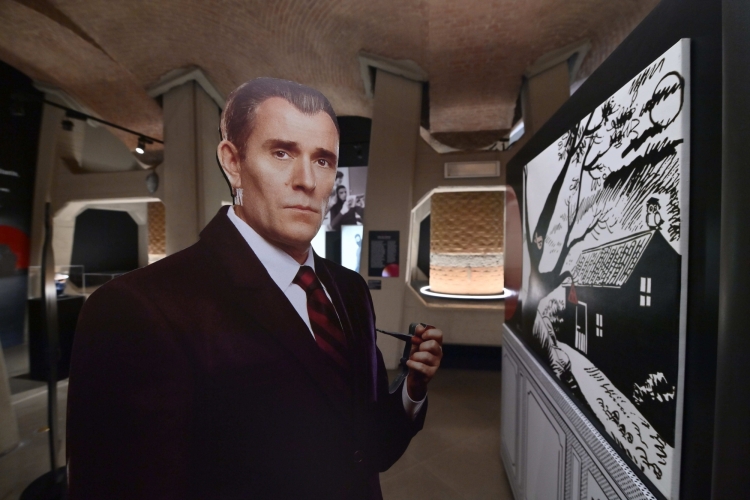 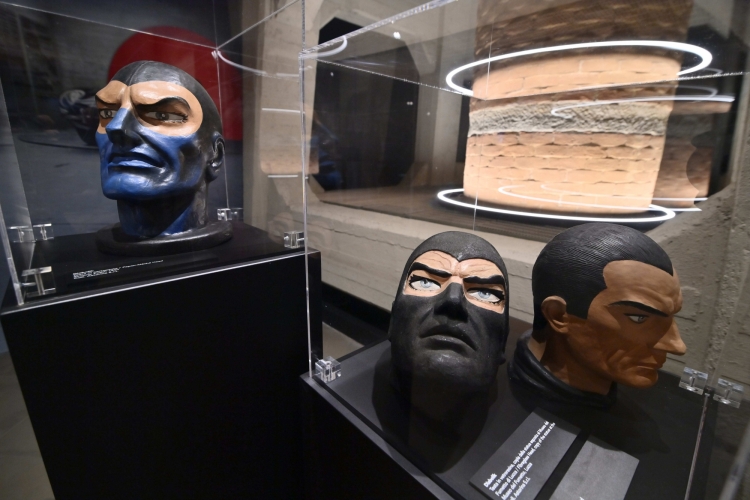 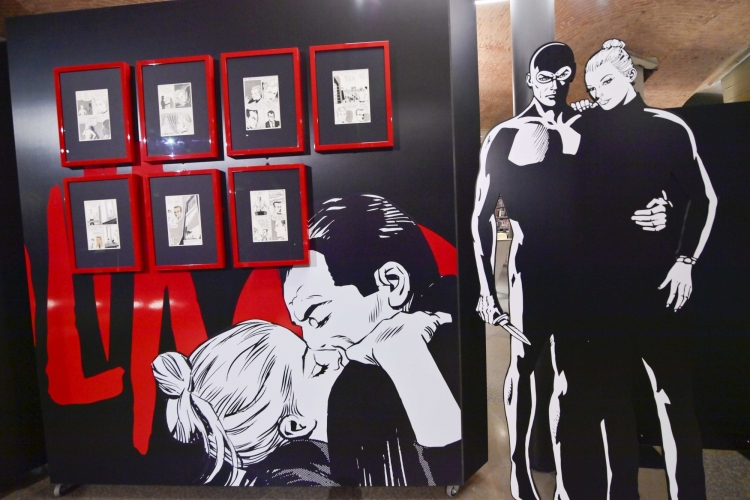 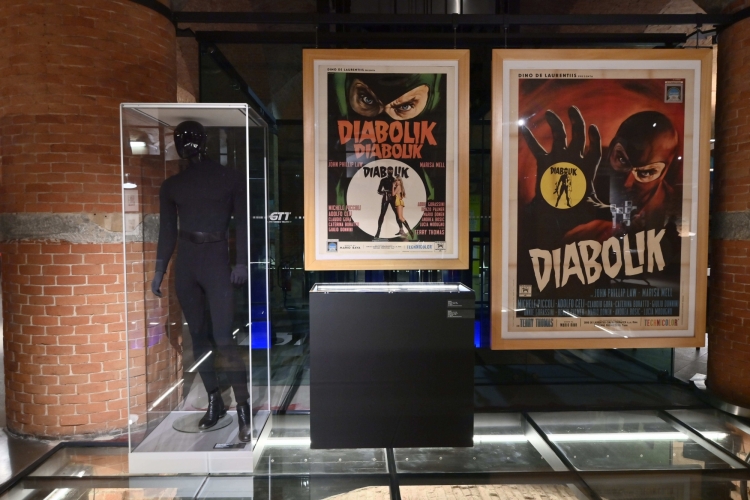 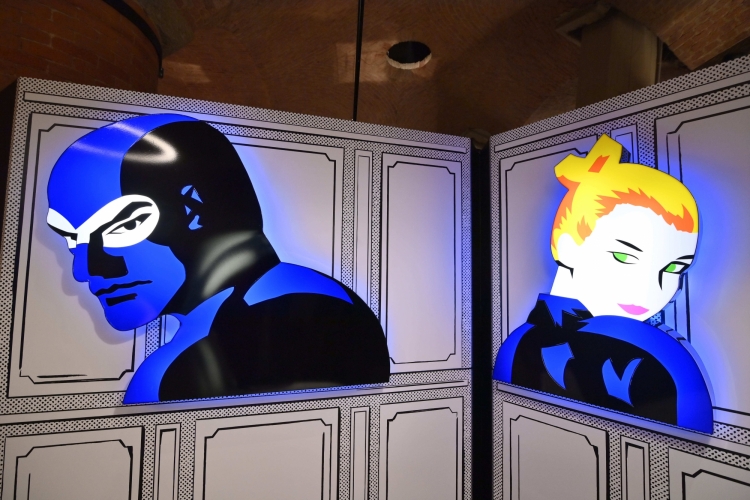 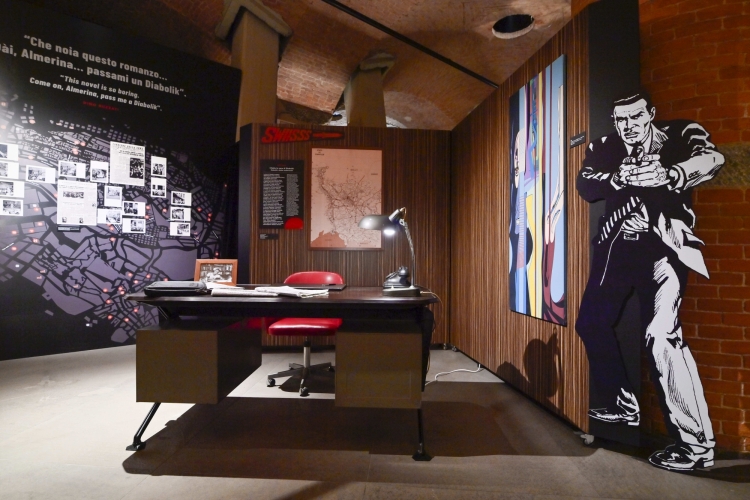 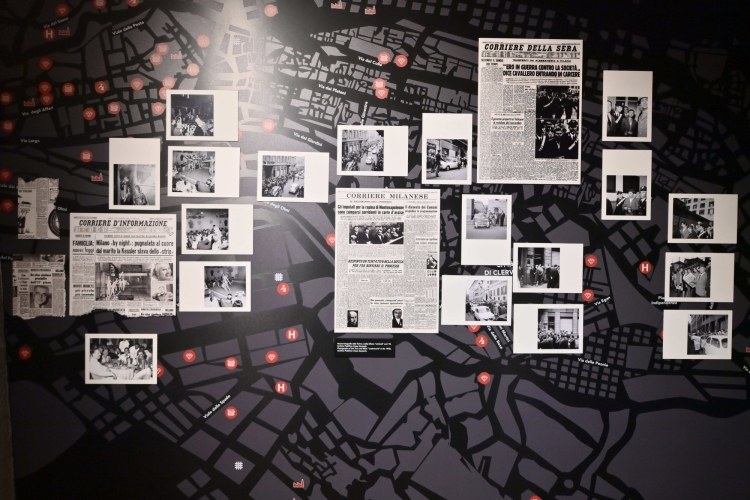 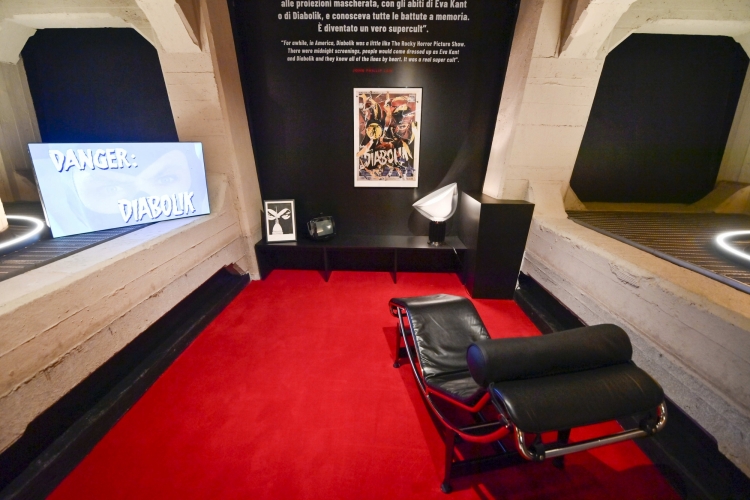 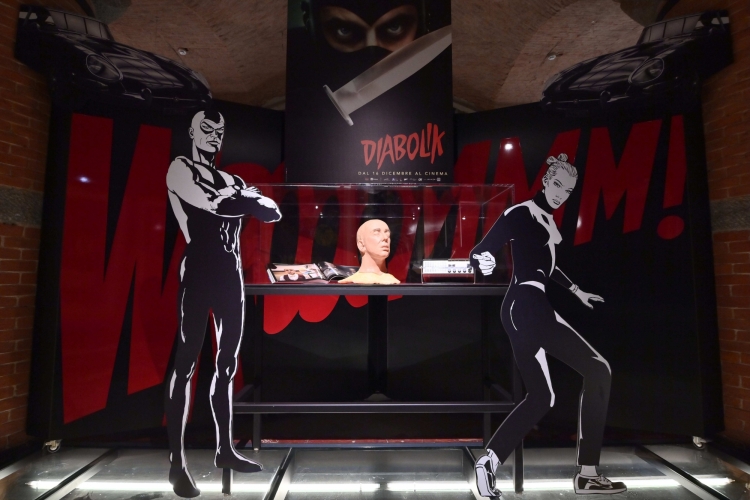 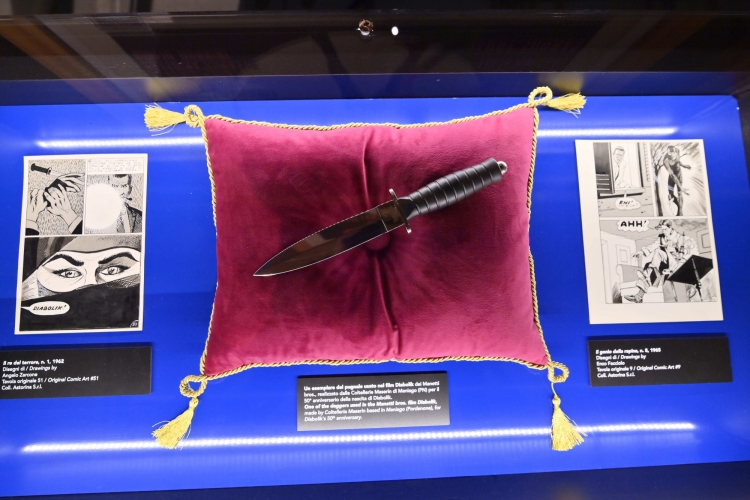 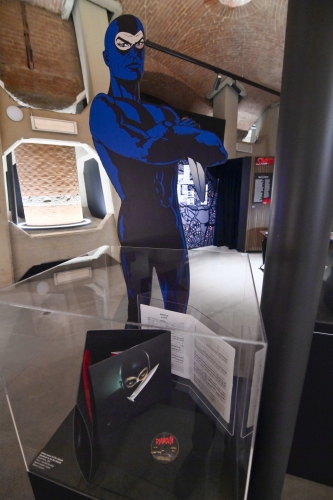